Epidaurus, the Theater from Ancient Greece: A Photojournal

“The Theater at Epidaurus is considered one of the purest masterpieces of Greek architecture and dates from the 4th century. The vast site, with its temples and hospital buildings devoted to its healing gods, provides valuable insight into the healing cults of Greek and Roman times.” – Epidaurus, Greece brochure From all of my travels in Europe over the past years, ancient Greece stands out as one of the most impressive. My family and I loved getting to see the Acropolis in Athens, with its stones still spilled across the high ground overlooking the city. But it was on a tour, taken on a whim, outside Athens into the Peloponnesian peninsula that we all fell in love with Ancient Greece. We honestly had no idea much of it still existed and could be toured, so when my 7th grade son’s class began studying Ancient Greece, and I realized I’d never sorted through the photographs I’d taken, I knew it was time to post them.

Epidaurus, the Theater from Ancient Greece

The theater at Epidaurus in the Peloponnesian Peninsula in Greece dates back to the 4th Century BC, and is built of 55 semi-circular tiers of limestone, making it one of the most impressive works of architecture from ancient Greece. The remains in the museum and the Theater are over 2,400 years old. 2,400 years!

Most of the other temples and buildings from ancient times at the site are in ruins, from earthquakes, wars, and time, but the museum holds many treasures found from the site. 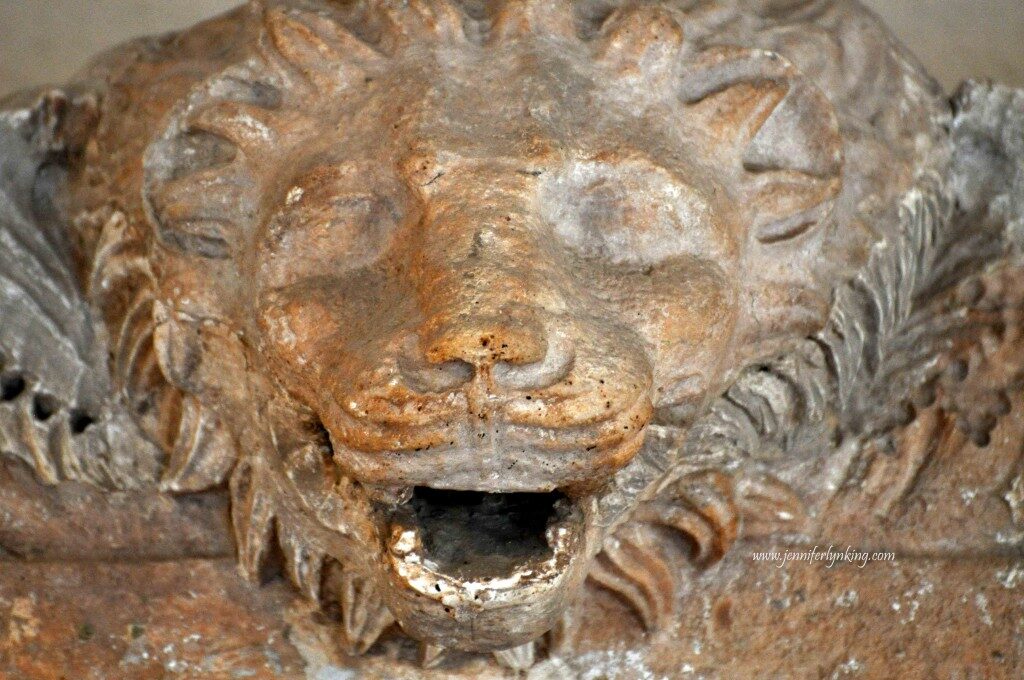 Ancient findings from the excavations at Epidaurus, related to Asclepius and the temples of Aphrodite and Artemis, are found in the museum. 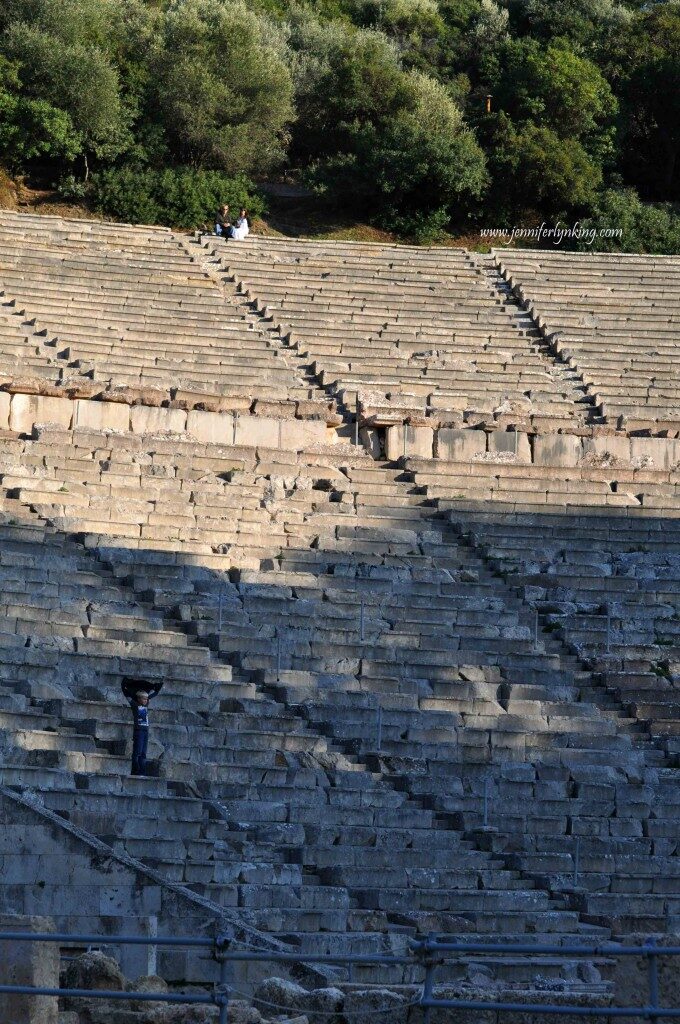 The theater is the architectural masterpiece of Polycletes the Younger of Argos, which was constructed around the 4th Century BC to seat up to 15,000 people, and due to the perfection of its proportions and acoustics, the speech or movements performed in the center of the circular stage can be heard, unamplified, by the spectators in the top row.

We were able to stand in the center of the ringed stage and make a sound, like flutter a piece of paper. Others in our group would wait at the top of the 55th tier and amazingly, they heard the paper rustle. 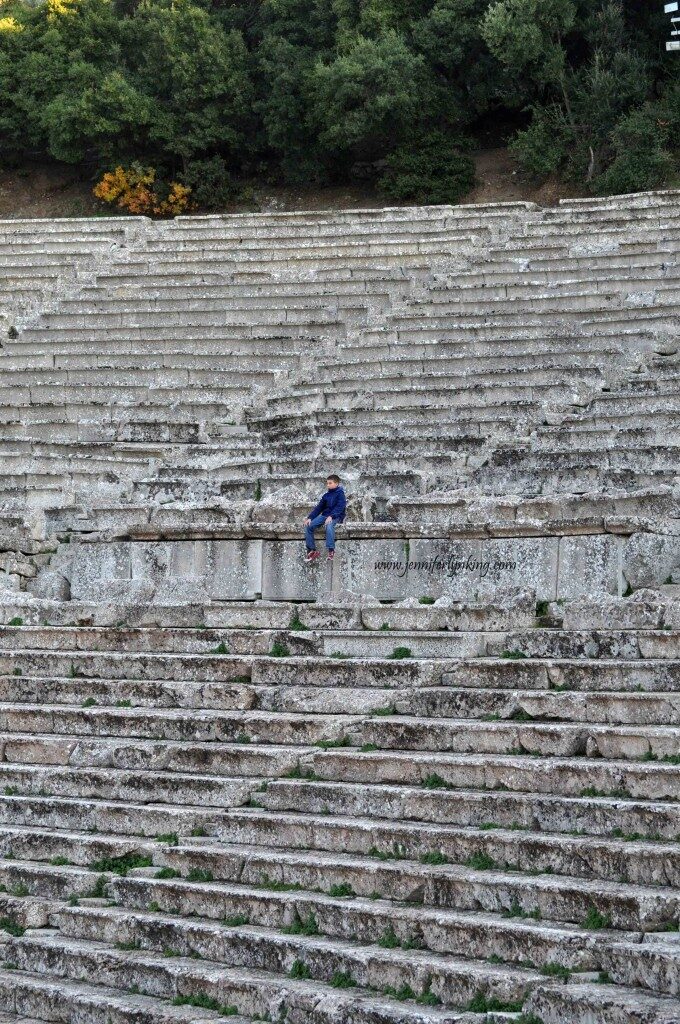 My sons enjoyed speaking, singing, and shuffling around the center of the stage. All of their movements could be heard easily at the top of the amplitheater. As you can see from the photos, the theater is massive. For those of us who’ve tried to speak and be heard in a normal setting, it was amazing to hear and experience the effects the Greek perfect symmetry and carefully placed limestone rows had on simple sounds. Earthquakes covered the theater in the years 522 and 551 AD, and subsequently the site at Epidaurus was abandoned. Only in 1881 AD did excavation begin, and by the 1920s, the theater began being used for performances once again. 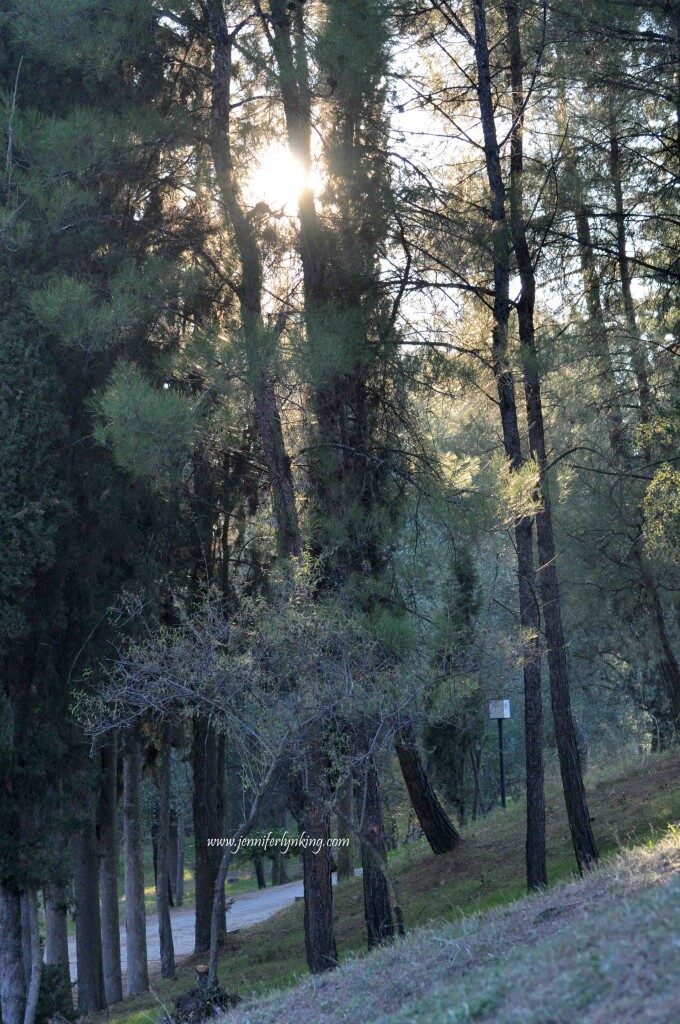 In Greek theater, the natural surroundings were also an important part of the theater and performances. In ancient times, before the destructive earthquakes and invasions by Gothic armies, the temples, park, and theater made up the surrounding area. Epidaurus was beautiful in November, when my family and I visited. If you plan to visit, the fall was a perfect time to go. Out of all the places we traveled and saw within Greece and Athens, Epidaurus and Mycenae were my favorites, for their profound age, ancient history, and tranquil setting.  I highly recommend taking a break from the bustle and noise of Athens and taking a tour of the ancient sites of the Peloponnesian peninsula in Greece.

Next week, and the week after, I’ll be posting photojournals of Mycenae and the Corinthian canal.